Situated 12kms west of Kanchipuram on the Madras -Bangalore Highway, near Balu Chetty Chattiram (about 80kms from Madras), the Vijaya Raaghava Perumal temple at ThiruPutkuzhi relates to the episode of Jataayu Moksham in the Raamaayana.

Eagle King Jataayu, a friend of King Dasharatha, had fought a valiant battle trying to rescue Sita from the Lankan king Ravana. Finally, the bird’s wings were cut off and Jataayu is said to have found Moksham here.

Legend has it that Raama, who had not been able to perform the last rites for his father as he was away in the forest at that time, derived some consolation by performing his obsequies and giving moksham to the Bird. In the Raamayana, this episode is referred to as the death of the 2nd father.

There is a separate sannidhi for Jataayu opposite the temple tank. On all festive occasions, Lord first visits the Jataayu sannidhi during his street procession.

Raama is said to have sent an arrow that created a pit here to bring sacred water into this place (this is where the temple tank is currently).

Jadayu belongs to Pul (a separate family of eagle ) family was burried in the pit (kuzhi) , this sthalam is called “Thiruppukkuzhi”.

Horse Vaahanam- A Special Feature
On certain festive occasions, Lord Vijaya Raaghavan goes on street processions mounted on his ‘Horse Vaahanam’. For a moment, one almost feels that this is a real Horse, with its jumping stride and movements. The man who created this horse specifically for Lord Vijaya Raaghava was asked to make another horse. He refused to recreate his magic for anyone other than the Lord. 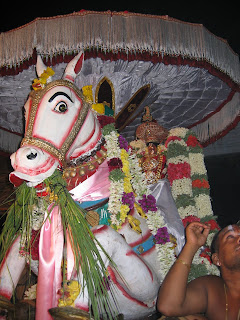 To this day, when the Lord is taken on a street procession on the Horse Vaahanam, he visits the place where the horse maker lived to pay regards the creater.

Childless Couple and Unmarried girls
Sincere prayers to Maragadavalli Thaayar at this temple, on ‘No Moon’ day, by observing fast, is said to yield immediate results for childless couples and unmarried girls.

Sri Devi to the Left of the Lord- A unique feature
Vijaya Raaghava Perumal is seen in a sitting posture, having the bird (Jataayu) on his thigh. Not able to bear the smell caused by the final rites and because of the flames that arose out of the cremation of Jaatayu, Sri Devi Thaayar is said to have moved to the other side of the Lord. At this temple, the Goddess is seen to the left of the Lord Vijayaraghava with her head slightly turned in the Lord’s direction (in all Divya Desams, Sri Devi Thaayar is seen to the right of the Lord). Also, the Thaayar Sannidhi is to the left of the Lord…In all Divya Desams, the Thaayar Sannidhi is always to the right of the Lord. 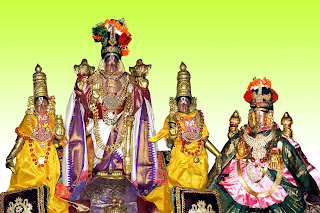 There is no direct reference to Raama or any Raamaayana episode in the above Paasuram. However, in ThirumangaiAzhvaar’s Periya Thirumadal, he says “Maragadhathai Putkuzhiyum Porethai…” referring to the Goddess, the location and the Lord. By ‘Porethai’, Thirumangai is possibly referring to “Lord Raama before the war/going for the war(with Raavana).”

Festivals: All round the year including Theppotsavam in Thai(Jan-Feb), 10 day Brahmotsavam in Maasi(March-April), Panguni –Sri Raama Navami