Bhoodevi takes the form and colour of Sridevi
3 kms North East of Thiru Kolur off the Tirunelveli-Tiruchendur highway is the big Nigaril Mugilvannan temple at ThenThiruperai, with the Lord seen in a majestic seated posture facing East. 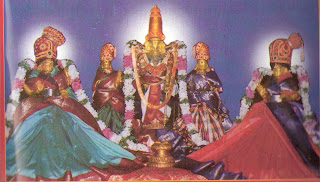 The story
Goddess Lakshmi was upset that Lord Vishnu was spending more time with Bhoodevi and not with her. She shared this grievance with Sage Durvasa and also wanted the same colour and beauty as Bhoodevi.

Durvasa, who then met with Bhoodevi, was angered at her disregarding his presence and cursed her to take the same form and colour as Sridevi.

While undertaking penance at this place on the banks of Tamaraibarani, she found two fish shaped ear rings and offered it to the Lord. The Lord who wore this came to be known as ‘Makara Nedun Kuzhaikathan’.

Since Bhoodevi had taken the form and colour of Sridevi (as a result of the curse), this place came to be called SriPerai/ThiruPerai.

Another Story
Having been defeated by the Asuras, Varuna (the Rain God) lost his chief weapon (he had earlier insulted his Guru and hence this fate) and undertook penance here. Lord Vishnu is said to have appeared before him on the full moon day in Panguni and helped him recover his lost weapon as well as his powers.

As a mark of this episode, it is believed that Varuna, visits this temple, every year, on the full moon day in the month of Panguni (March-April) to worship Vishnu.

The lord of Then Thiruperai is surrounded by mountain like jewel mansions.
He is Makara Nedung Kulai Kathan, one who is seen wearing Makara Ear Rings.

He is the Lord who killed a 100 Kauravas.
He is the one who stole my heart long long ago.