Located about 5kms West of Cuddalore Town on the way to Panruti is the Deiva Naayagan Divya Desam in Thiru Vahindrapuram. In centuries gone by, the location of this divya desam was identified as being 6 yojanas North of Kumbakonam, South of Kanchipuram and West of the Ocean.

Arjuna is said to have undertaken penance at this temple and hence this divya desam is said to date back to a time before the Mahabaratha. A few pieces from the Sanjeevani hill, carried by Anjaneya to Lanka, is said to have fallen on Oushada Giri ( the mountain here).

Defeated by the Asuras, the Devas looked up to Lord Narayana for help. Shiva who came to the rescue of the Asuras hurled his thunderbolt at Vishnu who intercepted it with ease. Vishnu then displayed his ‘Trimurthi’ form to Shiva and later returned Shiva’s weapon. On Shiva’s request, Vishnu stayed put at this place.

Thirsty Lord looks for water
Having undertaken the battle and helped the Devas win, Lord Narayana felt thirsty. While Garuda went around to bring water for the Lord, Adhiseshan swung his tail to blow open the earth, thus bringing water instantly and helping quench his Lord’s thirst. As a mark of this event, the sacred water here is called ‘ Sesha Theertham’.

Garuda is said to have gone all the way to Vaikuntam to bring water for the Lord from River Viraja. 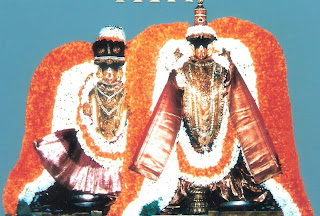 Interesting Story
Another story on this has it that Garuda who went around to bring water for the Lord came across a Rishi in mid air and finding water inside the Rishi’s sacred kettle, knocked it down, thus letting the water into this place. Angered at this act of Garuda, the rishi cursed turning the water into a dirty colour. Realising his folly, Garuda explained the reason for his hasty action and apologised. To this day, one finds the water in the river dirty but once in the hand, it seems pure and clear.

Garuda who came back late (after Adhiseshan had already helped quench the Lord’s thirst) requested the Lord to accept his water too as sacred. The Lord accepted the water on the Chariot Procession day. On this day, water from this river (Kedila) is brought and offered to the Lord.

This is the only Divya Desam where both vehicles of Vishnu brought water for the Lord.

Another story related to the temple goes thus: Brighu maharshi found a girl child on a lotus whom he reared with love and affection. He named the child as Bharghavi (daughter of Brighu). Note that there are only 2 places where the Thayar is named Bharghavi-Thiruvahindrapuram and at Adanoor.  The Thayar was also called Hēmâmbujanayaki as she was found on a golden lotus. From childhood,the girl was always thinking of her Lord and finally Lord Narayana himself came to Brighu Maharishi for permission to marry Bharghavi.  To save Brighu from the sadness of seperation from his foster daughter the Lord permitted him to continue to stay at this place with Perumal and his daughter in Thiruvahindrapuram.  Bhrighu maharishi is seen to the left of Lord Dēvanâtha in the Garbagriha.

Thayar also known by the name Tharanga Mukha Nâyaki- Thayar as a girl was very fond of going to the seashore and watch the waves always and hence the name for her fondness towards the sea.

Having gained dominating powers thanks to his sincere penance, a demon attacked Indira logam and drove out Indira, who is said to have gone into hiding here. The hassled Devas went up to Vishnu who asked them to perform a Yagam at Vahindapuram. On the completion of the Yaagam, Indira is believed to have come out of his hiding. Vishnu appeared before him and presented the Vajra Yudham with the help of which Indira defeated the demon and re conquered the Indira logam.

Old Inscriptions referring to the Lord
11th century inscription at this temple shows that the ThiruVahindrapuram Lord was referred to as the Standing Vishnu. Legend has it that the Lord here is considered as the brother of Tirupathi Srinivasa.

To the right of the main sannidhi is Lord Rama’s sannidhi where the “Kathora Sukumara” Raghuveeragadyam was composed. The beauty of Rama with the arrow in his hand resting on the ground,while that of Lakshmana’s arrow held upright by him as though ready to protect Rama and Sita from any danger .  One interesting feature is that Lord Anjaneya is not in his customary posture of folded hands or kneeling down, but his fingers are touching his nose (as we stand when we approach our Acharyan!)

On the  opposite side to the main sannidhi of Lord Ahindrapuranatha with Adishesha howering over his head, and  sannidhi of Bhasyakaran, Kulashekara Alwar, Thirupan Alwar and Thirukachinambigal.
On the other adjoining side of the main sannidhi and the above sannidhis is Swami Deshikar’s sannidhi to the left of him are Lord Ranganathar sannidhi, Andal and the sannidhi of the Azhwars.

Desikar got a sculpture(Thirumeni) of his done at this temple. A sculptor questioned the Desigar if he could give life to this art form. When the sculptor touched the Thirumeni to get a feel of it, there was a scratch seen on it and to his shock, he found blood flowing down. Realising his mistake, the sculptor is said to have apologized to Sri Desikan.

Lakshmi HayaGriva temple
There is a Hayagriva temple atop the hill opposite the Deiva Naayagan temple.Oushadagiri hill consists of 73 steps to be precise which are quite very easy to climb to obtain the blessings of Lord Lakshmi Hayagrivar. The story goes that two demons had taken away the Vedic scriptures from Brahmma. Vishnu is said to have taken the Hayagriva form and brought back the Vedic scriptures from the demons. Being the place where Lord Vishnu, in Hayagriva form, brought back the educative scriptures, he is referred to as the God of Learning. He is said to fulfill one’s prayers relating to education and studies at this temple. 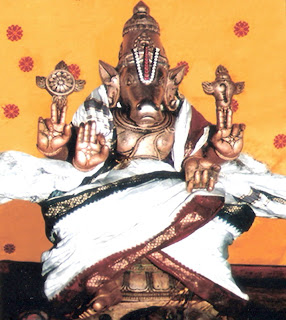 Snake Pit
In this Divya Desam, milk is not poured into the snake pit. Instead it is poured into the ‘Sesha Theertham’. People offer pepper,salt, milk, honey, turmeric and others into the Sesha Tirtham as part of their prayers and still it is indeed a divine wonder that the water is used for preparing the daily nivedanam to the Lord.

Contributions to this temple

Pandya, Chozha, Chera, Sinhala and Raya rulers are said to have contributed to this temple.

This is said to be a prarthana sthalam for ‘Good Education’ and to cure ‘speechless children’. This place is also believed to liberate one from doshams.

How to reach the temple
Cuddalore is well connected by bus from all major towns and cities in Tamil Nadu.
One can reach ThiruVahindrapuram in about 4 hours by bus from Madras.

From Cuddalore, one can take a town bus ( route 16) to Ahinthai. From the bus stop(1/2 a km from the temple entrance), one may take an auto to reach the temple.

An auto from Cuddalore bus stand can also be considered.