Rain and floods forces ThiruMangai Azhvaar to have his longest wait at any Divya Desam. Thiruneermalai is a prarthana sthalam for all kinds of problems, especially for marriage.

The 2000 year old Divya Desam praised by ThiruMangai Azhvaar and BhoothathAzhvaar is on the outskirts of Madras, about 5 kms West of Pallavaram. At Thiru Neermalai, one finds Lord Vishnu in four forms – Sitting, Sleeping and Walking posture atop the hill and Standing posture in the temple at the foot of the hill.The story of ThiruMangai’s wait 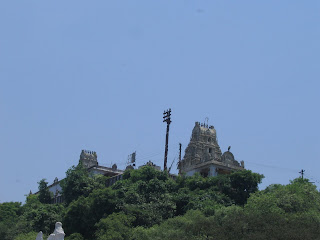 Thiru Mangai Azhvaar came here to sing praise of the Lord but heavy rains flooded the place and he could not reach this temple. Having come this far, he decided to wait till the rains stopped. It proved to be a long wait of 6 months before Thiru Mangai could meet his Lord. The hill on which he stayed during these 6 months still exists and is called ThiruMangai Azhvaar Puram. This is the only Divya Desam where Thiru Mangai waited this long to meet the Lord. One has seen in the stories relating to a few of the other Divya Desams where Thiru Mangai has left/threatened to leave without waiting for the Lord.Utsavar goes up the hill only thrice a year

The Utsavar deity of Ranganatha is seen at the Neer Vannan temple at the foot of the hill. Only thrice a year- on the first and last day of Brahmotsavam festival and on the Panguni Uthiram day- is he taken up the hill to be alongside the Moolavar Lord Ranganatha. This place is called Madhya Rangam and Lord Ranganatha is seen in Bhoga Sayanam.Darshan as Raama to Valmiki
Having offered his prayers to the three Lords atop the hill, Valmiki is said to have missed the presence of Lord Raama at this place and is said to have undertaken penance thinking of Lord Raama.. Ranganatha is said to have appeared before him as Raama, Lakshmi as Sita and Adhiseshan as Lakshmana at this place.Azhvaar Praise 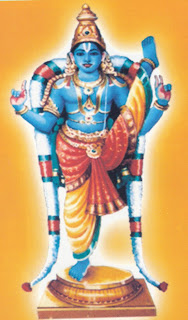 Among the Divya Desams, this is the first Thaayar (Goddess) – Mani Maa Malar- that Thiru Mangai has praised with his paasurams.

BhoothathAzhvaar in his only paasuram compares this temple to Srirangam and Tirupathi.

One of the two oldest ‘hill’ Divya Desams
During Dwapara Yugam, there were only two Divya Desams that were on hills. One was Ahobilam and the other was Thiruneermalai. 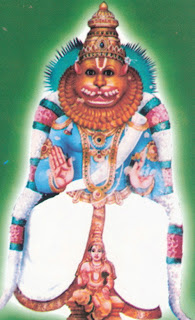 It is believed that Lord Narasimha gave darshan to Arjuna after he performed the Ashwamedha Yaagam here at this place. Only Divya Desams where Lord Narasimha is seen in a cool posture – called ‘Shaanta Narasimhar’.

Prarthana SthalamThis is a prarthana sthalam and the Lord is said to answer prayers relating to different issues, especially marriage.

Deity : Neer Vannan ( at the foot of the hill) standing posture facing East

Deities atop the hill: Ranganatha in Bhoga Sayanam, Shaantha Narasimha in Sitting posture and Trivikrama in Walking posture

Bus from Pallavaram Bus Stand : 55A