Paranthaka renovated the temple and built the Veera Narayana Lake

Kattu Mannar Koil is the Avathara Sthalam of Natha Muni who was responsible for bringing back the Nalayira Divya Prabandham that had been previously lost to the world. It was Veera Narayana Perumal, the presiding deity at Kattu Mannar Koil, who asked Nathamuni to collect the verses of the Azhwars and to spread the positive message contained in these sacred verses.

In centuries gone by, the direction to Kattu Mannar Koil was given as being North of Cauvery / Coloroon, West of Veda Pushkarani and South of Vedanarayana (Veeranam) lake.

Pleased with the penance of Jhirumbana Raja Maharishi, who was childless, Goddess Mahalakshmi herself was born here as his child. Once she grew up into a beautiful young girl, there was a svayamvara organised to find her match.

Lord Narayana came here in his Garuda Vahana in the guise of a king (Mannan) to participate in the Swayamvara. Having won over her, he took her away much to the wrath of the other kings who attacked him. Lord Narayana, displaying his Vishwaroopa, defeated them all. Having shown his valour here, the Lord came to be called ‘Veera’ Narayana Perumal.

Another story goes that Mathanga Rishi, to liberate himself from Brahma’s curse for having committed an error in the recital of the vedic chant, went to Srimushnam, where the Lord appeared before him and redirected him to Manyu Kshetram (Kattu Mannar Koil), South East of Srimushnam to undertake penance in the Veda Pushkarani. Answering his prayers, Lord Narayana displayed his Chathurbhuja form here at Kattu Mannar Koil and acceding to the request of the rishi stayed here to provide darshan to the devotees. 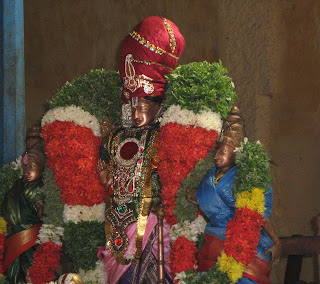 Nathamuni, who mastered himself in Vedas at a young age, was very attached to Veera Narayana Perumal of Kattu Mannar Koil and spent most of his time performing daily poojas for the Lord here. One day, while he was performing his daily rituals, he heard a set of devotees from Thiru Narayanapuram chanting the Aaravamuthey verse. These devotees ended their chanting with the words “these 10 out of the 1000”.
Nathamuni was drawn to these songs and asked them to sing the rest of the 990 verses. However, they knew only these 10 songs. 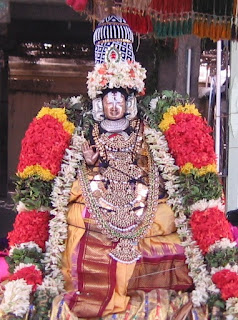 Seeking to find these 1000verses, Nathamuni left Kattu Mannar Koil for Kumbakonam, where Lord Aaravamudhan directed him to Thiru Kurugur. Unable to get his answers at Kurugur, he went to Thiru Kolur, where he got initiated with Madura Kavi Azhwar’s verses of Kannin Siruthambinaal. He came back to Thiru Kurugur and sitting under the Tamarind tree recited these verses 12000 times, on completion of which Nam Azhwar appeared before him and shared not just the 1000songs that he was looking for but the entire 4000 verses.

Along with his nephews, Keezhaiyagath Azhwar and Melaiagath Azhwar (the Araiyars are descendents of these two), Nathamuni presented the Naalayira Divya Prabandham, that was until then only in a text form, in a musical and dance form, creating Raga and Thala, that the world could experience and enjoy. To Natha Muni goes the credit of creating the Araiyar Sevai, a visual song and dance enactment of the ‘Paasurams’ through the Abhinaya.

He went to Srirangam and presented the Araiyar Sevai, of the Thiruvoi Mozhi verses with his two Nephews, and once again started the Adhyayana Utsavam at Srirangam which had been discontinued after the time of Thirumangai Azhwar.

There are 5 wells inside the temple and an expansive garden, which Nathamuni used for his daily poojas for Veera Narayana Perumal.

As Lord Narayana came here as ‘Mannan’ to take the hand of Mahalakshmi and later showed the way for Nathamuni to compile the Divya Prabandham and the Vaishnava Sampradaya to the world at large, he was referred to as ‘ Kattum’ ‘Mannan- Aanaar’. In course of time, Kattum Mannan-Aanaar became Kattu Mannar.

Born in Kattu Mannar Koil, Nathamuni’s grandson ‘Yamunai Thuraivan’ (Alavanthan) travelled often to Srirangam to spread the message of Vaishnavism. Alavanthan nominated Ramanuja as the acharya to succeed him after his death.

By road from Chennai, one can reach Kattu Mannar Koil by taking the Vikravandi- Panruti-Sethiya Thope route (about 235kms)