Born in Thiru Mandangudi, Thondaradipodi Azhvaar (his original name was Vipra Narayanan) was lost in love for Lord Ranganatha of Srirangam. Very early in his life, he moved from Thiru Mandangudi to Srirangam and mastered himself in Vedas. His devotion was so enduring that he thought of none but Ranganatha. This devotion meant that he decided to sing praise only of the Lord of Srirangam and of no other Lord. Dedicating his life to the service of Lord Ranganatha, he created a beautiful Nandavanam in Srirangam and with a basket in hand immersed himself in collecting flowers and making beautiful garlands for the Lord every day.

Having heard of the Lord accepting Thirumazhisai Azhvaar’s request to come out of the kingdom in Thiruvekka near Kanchipuram and provide a special Maaru Sayanam posture there on his return, and another special posture in Kumbakonam with his Uththana Sayanam as Aaravamuthan, Thondaradipodi was keen that he too be given a special darshan from his favourite Lord Ranganatha.

Ranganatha promised him to provide such a darshan but asked him to go to his birth place at Thiru Mandangudi. Unwillingly, he left Srirangam and reached Thiru Mandangudi. To his surprise, he saw Lord Rangantha waiting for him in a special and rare standing posture to provide darshan along with Sri and Bhoo devi.

As Lord Ranganatha surprised Thondaradi Podi Azhvaar with this special standing darshan at his very own birth place, he is referred to as ‘ Varam Tharum’ Perumal and is believed to accede to and grant sincere prayers of the devotees who visit this temple at Thiru Mandangudi.

The story goes that both of them had heard of some beautiful early morning songs in praise of Ranganatha and wanted to listen to Thondaradipodi Azhvaar’s Thirupalli Ezhuchi and are believed to have made a trip to Thiru Mandangudi to be treated to those sweet ‘wake up’ verses of Thondaradipodi.

Thondaradipodi refused Lord Ranganatha’s offer to go to SriVaikuntam and also refused the offer to go to the any other 14 logams (7+7 logams).  Azhwaar just wanted his place in the third world – Srirangam. Nothing could move him out of here. He did not want to be denied the opportunity and the joy of singing praise of Lord Ranganatha.

Thondaradipodi Azhvaar says that he does not desire another birth for in the 100years that one is granted, half the time is spent sleeping. The balance time is wasted away in Childhood and adolescence (when we are clueless on what we do), disease and hunger and later old age.

Through his 10 verses of Thiru Palli Yezhuchi, Thondaradipodi Azhvaar praises the greatness of Lord Ranganatha and asks him to wake up now that the great rishis are waiting for him, with the elephant having arrived at the temple, with devotees thronging the temple very early in the morning for his darshan leaving no place even to stand- such is the devotion of everyone towards Lord Ranganatha. 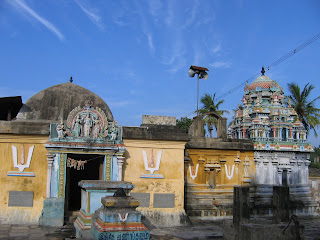 Ranganayaki Thaayar is seen with a fully bloomed lotus in her right hand and with a flower stalk in her left. This is a special feature at the temple

Prarthana Sthalam for Unmarried people
This is believed to be a prarthana sthalam for unmarried people. Those who perform Thirumanjana here and offer their sincere prayers are said to get married immediately.

KG Giri Bhattar is very special taking care of both the pooja formalities as well as the Madapalli. His versatile rendering of the relevant verses of the Prabhandham and his sincere devotion and performance of daily poojas for the Lord of Thiru Mandangudi is very impressive.

Festivals
4day Pavitrotsavam in Aadi
Azhwar Utsavam on Margazhi Kettai – Lord Ranganatha and Thondaradi Podi Azhvaar together go on a procession to Koonanjeri for the only outside procession of the year.

Separate Sannidhi for Thondaradipodi Azhvaar who is seen facing South

Town Bus Numbers 30 and 12 ply every hour from Kumbakonam (Thiruvaikavur bound bus). One should get down at Koonanjeri and walk about 10minutes west to reach the temple

The temple is just under 10kms East of Kapisthalam Divya Desam